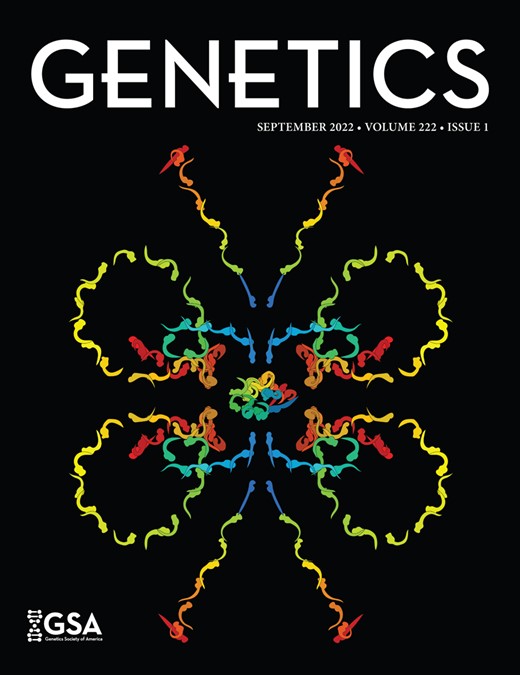 The journal of the Genetics Society of America, GENETICS and G3: Genes|Genomes|Genetics, are calling for submissions of papers in the area of Genetic Models of Rare Diseases.

Authors are invited to submit manuscripts by 14 November 2022. More info can be found here. 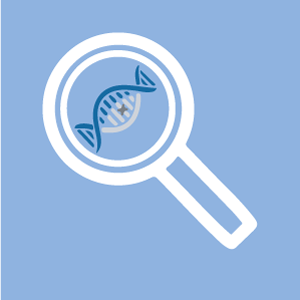 The Solve-RD periodic report for the third reporting period has just been submitted.

We have continued producing and enriching the Rare Disease Case Ontology (RDCO). Up to now, RDCO has been populated with 412,500 similarity associations.

Re-analysis of data freezes 1 & 2 has been done by the Data Analysis Task Force DATF working groups. Results have been prioritized and interpreted by the Data Interpretation Task Forces (DITFs) of each ERN. This collaborative effort led to the diagnosis of 511 patients from 6,003 families. This is already an 8.5 % additional diagnostic rate although many of the analyses and evaluations are still ongoing. The new re-analysis approach pursued in Solve-RD as well as the structures we established to warrant best exchange of expertise have been published in a series of papers in the EJHG in June 2021.

Service providers have been chosen for all novel omics technologies. SOPs for biomaterials have been shared with all ERN partners via the DITFs. Sample shipment is only slowly progressing; however, >3,000 samples have been sent to the central lab in Nijmegen for QC and then further distributed to the respective service providers.

The RDMM-Europe brokerage service connecting Solve-RD partners who discovered novel RD genes with model organism scientists that have the expertise to functionally validate these genes and variants opened 10 calls for Connection Applications. 36 Seeding Grants have been awarded so far.

The co-designed models for the communication of genomic results for RD have been published (Costa et al.). The main finding at both study sites in the Czech Republic and the UK was the identification of post-test care as the shared priority for improvement for both health professionals and families.

The conference ECOgenomics “European Conference on the Diffusion of Genomic Medicine: Health Economics & Policy” took place online from 26-28 May 2021. Plenary sessions and parallel thematic sessions brought together researchers from the human sciences (mainly health economics), but also researchers from other disciplines.

The Treatabolome database has been released and an API connects it to the RD-Connect GPAP to make information about treatable genes and variants of RDs accessible and to improve the visibility of existing variant-specific treatment options at the time of diagnosis to clinicians and their patients. It includes data from 10 systematic literature reviews of which six have been published in a special issue in May 2021 in the JND.

The data flow system has continuously been adapted to the project’s needs involving GPAP, the EGA, omics service providers, the sandbox and RD3. GPAP’s new Cohort App module facilitates the exploration and construction of cohorts on experiments metadata and structured clinical data using standard ontologies to improve the analysis of defined cohorts. The FUSE client enables access to files stored at the EGA via the Sandbox and also for real-time visualisation in a genome browser like IGV when analysing data in the GPAP.

MSCA-PF 2022 in peripheral nerve and muscle disease at University of Antwerp, Belgium

The Peripheral Neuropathy and Translational Neurosciences groups of the µNEURO Research Centre of Excellence (University of Antwerp, Belgium) welcome expressions of interest from postdoctoral researchers with a strong scientific track record to jointly prepare a high-quality proposal for an MSCA Postdoctoral Fellowship 2022 in the field of neuromuscular disease and peripheral nerve degeneration.

More info can be found here. 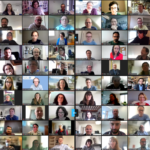 The Solve-RD Annual Meeting took place from Monday to Tuesday, 25-26 April 2022. Although virtually, it was a success!
It was great to see the results coming out of the project and to listen to all the fantastic presentations – especially from so many junior scientists. Congratulations to Robin Wijngaard (Nijmegen) and Vicente Yépez (Munich) for the best full presentation as well as Elke de Boer (Nijmegen) for the best flash talk! 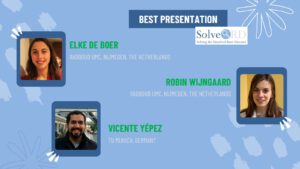 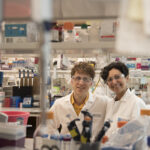 Racing against time: Seeking the cure for a deadly disease

Ten years ago, Harvard Law School student Sonia Vallabh’s world was turned upside down when her mother’s health rapidly deteriorated after initial complaints of trouble with her vision. Descending quickly into dementia, pneumonia, and disability, it was not until after the death of Sonia’s mother that a diagnosis for prion disease was confirmed. But the nightmare did not stop there — Sonia soon found out that she, too, had inherited the deadly disease.

We are very grateful that Sonia Vallabh and Eric Minikel accepted the invitation to give the keynote lecture at our Solve-RD Annual Meeting 2022! It was impressive to hear their story and to feel their determination to find a treatment for Sonia’s disease.

Prior to the meeting we have invited Sonia to share her thoughts on the future of rare disease research, as well as her own race against time to come up with a life-saving treatment. Read the full interview here.

We would like to inform you  that Sonia and Eric helped to launch a prion disease registry at PrionRegistry.org. This is a tool to help recruit for clinical research and also someday, clinical trials. In the meantime, numbers from the registry help to convince partners across sectors that even though this is a rare disease, they are well organised and capable of running rigorous clinical trials. So, by signing up, patients and families help to convince the world that this disease is worth working on!

Solve-RD associated partner Rita Horvath lab at the University of Cambridge, UK is lookig for a Research Associate in Neurobiology/Mitochondrial Biology (Fixed Term) to identify how mitochondrial function is affected and which substrates and pathways are commonly and differently impaired in selected cell types of patients with mitochondrial diseases.

More info can be found here. Application deadline is 10 May 2022! 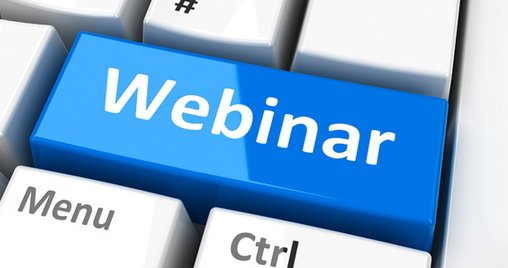 Solve-RD WP4 is organising a workshop on how to navigate the Sandbox.

This combined webinar & workshop will provide an update on Solve-RD Sandbox services/functions, and also consider future plans, needs and possibilities. Intended participants include ERN data controllers/producers (to ensure that their data is being managed in ways they are happy with) and DITF members (to ensure they have services they need now and going forward).

To begin, the current status of the Sandbox will be presented, including its RD3 metadata layer and the Discovery-Nexus support capabilities. Via these components, users can find, filter, and access cases and related data and results. The system will be demonstrated for some example use cases. The meeting will then transition into a workshop activity, to gather reflections from participants, and propose improvements for the future. This will encompass possibilities within and beyond Solve-RD, including multi-omic data analyses and the ambition of federating services with those of EJP-RD and GPAP.

The Solve-RD Annual Meeting 2022 will take place on Monday and Tuesday, 25 & 26 April. Due to the current situation it will again be fully online.

All Solve-RD beneficiaries, associated partners and collaborators are invited to register for the meeting. The registration is open until 18 April via this link.

Further information can be found here.

Solve-RD uses the RD-Connect Genome-Phenome Analysis Platform (GPAP) to analyse exome and genome sequencing data of rare disease patients. In October 2021 we organised two webinars: one on basic analysis using GPAP and the other on advanced platform features. Both webinars are now online: 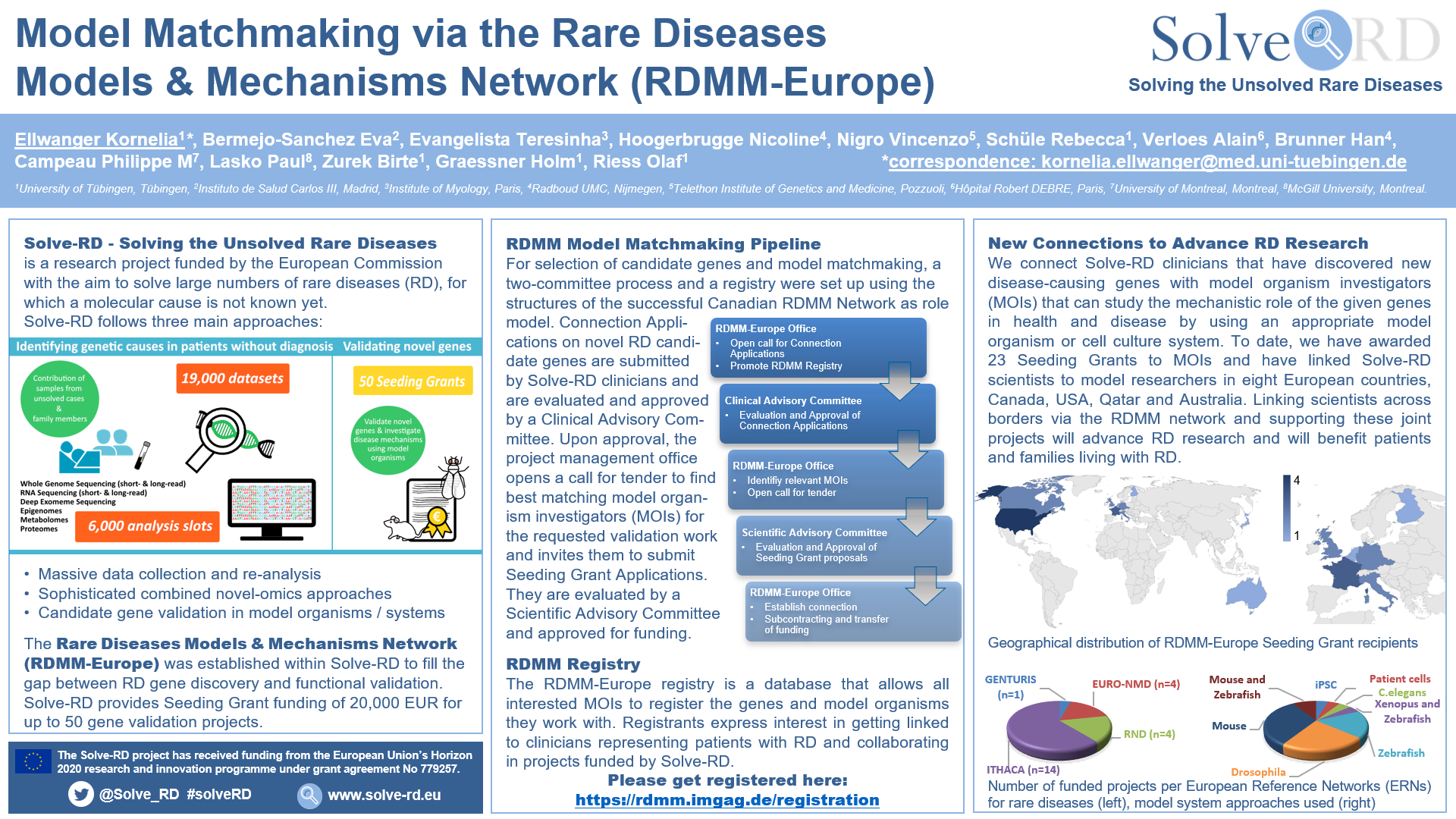 Solve-RD at the IMPC 2021 conference

The ‘Mouse Genetics and Genomic Medicine’ virtual conference organised from 23-24 September 2021 by the International Mouse Phenotyping Consortium –IMPC (https://www.mousephenotype.org) will celebrate the occasion of the 10th anniversary of the establishment of the IMPC.

Solve-RD will present a poster on "Model Matchmaking via the Rare Diseases Models & Mechanisms Network (RDMM-Europe)".

In medical genetics, there is a critical need for model organism research, to assess new disease-gene associations, to understand pathophysiology and to test potential therapies. Within the Solve-RD project we established the European Rare Disease Models & Mechanisms Network (RDMM-Europe) to facilitate fruitful collaborations of model organism researchers and clinicians following patients with rare diseases (RD). The principle of this brokerage service is to fill the gap between RD gene discovery and functional validation. For that purpose, we connect Solve-RD clinicians that have discovered new disease-causing genes with model organism investigators (MOIs) that can study the mechanistic role of the given genes in health and disease by using an appropriate model organism or cell culture system. Solve-RD supports these validation projects with 50 Seeding Grants of 20,000 EUR each.

For the selection of candidate genes and model matchmaking, a two-committee process and a registry were set up using the structures of the successful Canadian RDMM Network as role model. The RDMM-Europe registry is a database that allows all interested MOIs to register the genes and model organisms they work with. Registrants express interest in getting linked to clinicians representing patients with RD and collaborating in projects funded by Solve-RD. The RDMM-Europe registry is also linked to international partner networks. Connection Applications on novel RD candidate genes are submitted by Solve-RD clinicians and are evaluated and approved by the Clinical Advisory Committee. Upon approval, the project management office opens a call for tender to identify best matching MOIs for the requested validation work and invites them to submit Seeding Grant Applications. They are evaluated by a Scientific Advisory Committee and approved for funding.

To date, we have awarded 23 Seeding Grants to MOIs and have linked Solve-RD scientists to model researchers in eight European countries, Canada, USA, Qatar and Australia. Linking scientists across borders via the RDMM network and supporting these joint projects will advance RD research and will benefit patients and families living with RD.